Share to friends
Former U.S First Lady, Michelle Obama posted an adorable photo of herself as a little girl in a tribute to the South Side community, where she grew up. 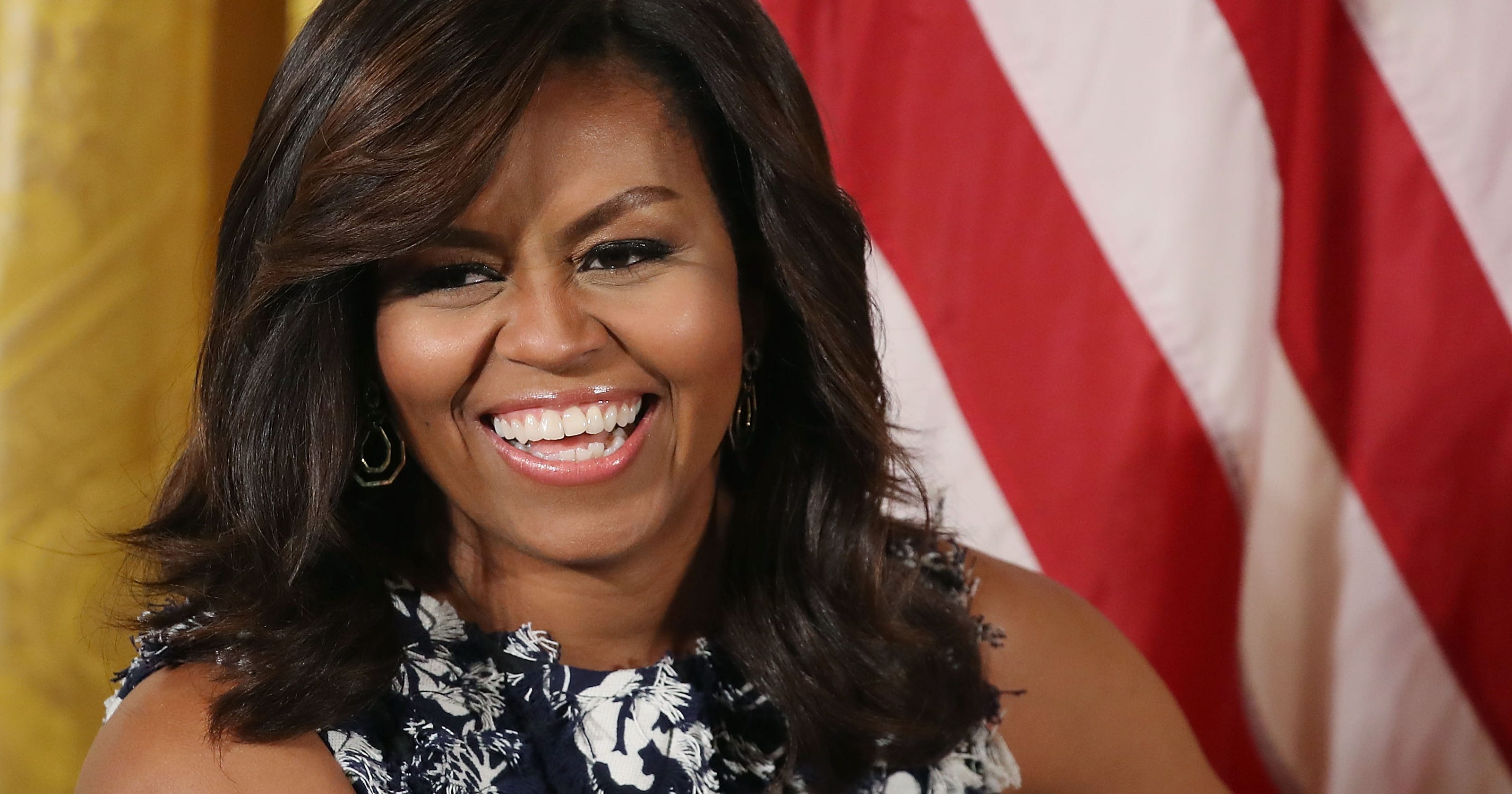 “Chicago made me who I am. I wanted to pay tribute to the South Side community that poured so much love into me from the very beginning, so I wrote this letter to The Chicago Defender. I hope you’ll read it #IAmBecoming” she captioned the post. Read her tribute below.
In the summer of 1975, Dr. Joseph A. Lavizzo, Jr., the principal at Bryn Mawr Elementary School in South Shore at the time, wrote a letter to this newspaper. In it, he defended his school from a vitriolic opinion piece that had been published a week earlier, which referred to Bryn Mawr as a “run-down slum” governed by a “ghetto mentality.” Dr. Lavizzo fought back forcefully, calling the charges “an outrageous lie, which seems designed to incite only feelings of failure and flight.”
At the time, I was going into seventh grade. Bryn Mawr was my school, and Dr. Lavizzo was my principal. I didn’t know that the letter had been published, but by then I’d already begun to recognize what was happening in my neighborhood.

In kindergarten, my classroom had been wonderfully diverse, full of children of varying ethnic and economic backgrounds—Black and White, Hispanic and Asian, most of us middle-class, though some families landed on either side of that description. In the span of just a few years, though, most of the better-off families left our neighborhood for the suburbs, and by fifth grade, almost every student in my class was Black. As “White flight” took off, prospects in South Shore fell. Observers began throwing around words like “ghetto” to describe our neighborhood. My mother would tell me years later that all the while, predatory real estate agents were never far, whispering to home owners that they should sell before it was too late. The future was coming, they’d say, and it didn’t look good.
Dr. Lavizzo certainly saw all of that, too. In his letter, it’s clear he understood that he was up against something much larger than an unfair opinion piece—he was up against the idea of failure itself. As I write in my memoir, Becoming, failure is a feeling long before it is an actual result. It’s vulnerability that breeds with self-doubt and then is escalated, often deliberately, by fear. That’s what Dr. Lavizzo and so many others in our community fought back against. It’s why teachers stayed up late grading papers and summer-camp organizers dedicated themselves to kids all across South Shore. And it’s why my parents invested themselves so deeply into my older brother Craig and me. My mother became one of the most active members of the PTA at Bryn Mawr, raising money for new equipment, throwing teacher-appreciation dinners, and lobbying for classes and strategies that would better serve the neighborhood’s children. All of those people shaped me, every single one of them.
Today, when someone compliments my mother on the successes of her children (my brother is an executive in professional basketball), she just chuckles and replies that neither of us was anything special. When we were growing up, she’ll say, the South Side was full of thousands of little Michelles and Craigs—good kids who worked hard and knew the difference between right and wrong. The rest of the world just didn’t get to see that very often.
And that’s why I’m writing to all of you—because all of that is still true of the South Side today. It’s true of all of Chicago’s neighborhoods. I just want to make sure you all see it, too.
I know that many of you are up against more than my family ever had to deal with. I know that every day can feel like a struggle and it can be harder for families to get ahead. I know that gangs rule too many streets, that guns and drugs have infested too many neighborhoods, and that too many people who’ve never lived here or even visited find it too easy to just write off parts of this city.
But what I also know is that at its heart, the South Side is still the same place that shaped me. I’ve seen it with my own eyes. As First Lady, I saw it in the students at Harper High School in West Englewood, where, in the year before I visited, 29 students and recent graduates had been shot, 8 of them fatally. The kids I spoke to were shouldering far more than I’d ever experienced growing up—far more than any kid should ever have to carry. Those kids had every reason to give up. But what they showed me wasn’t despondency, it was resilience. It was hope. Those students were just as smart and hardworking as my daughters or any other teenager in America, and beyond that, they had a hard-won grit that their peers couldn’t compete with.
I’ve seen that same resilience in mothers like Cleopatra Cowley-Pendleton, who raised a daughter named Hadiya, a beautiful young girl who could have been me four decades earlier. Cleopatra had done everything right, signing up her daughter for volleyball, cheerleading, and a dance ministry at church. Hadiya was a bright light, but as you all know, she was taken from us far too soon in yet another senseless shooting. In the years since her death, however, Cleopatra has transformed her grief into advocacy for gun-violence prevention. She’s fighting not just for her own child but for everyone’s.
That is exactly the spirit that surrounded me as a child. It’s what compelled Dr. Lavizzo to pen that letter to the editor. It’s what drove my mother to attend all those PTA meetings. It’s what motivated the teachers who taught me and the neighbors who looked out for me. None of them could have known that a kid from South Shore would grow up to become First Lady of the United States—but they fought like it anyway.
Today, Bryn Mawr has been repurposed as Bouchet Math and Science Academy. Many of the South Shore stores and gas stations I knew as a child are gone or they’ve changed owners. But all the love that was poured into me? That’s still there. I know it is. And that’s why I can’t wait to see the good that comes out of the neighborhoods all across Chicago in the years ahead. I can’t wait to see what’s next for all the young people growing up today, walking the same sidewalks and sitting in the same classrooms as I once did. There’s no telling who they might become. 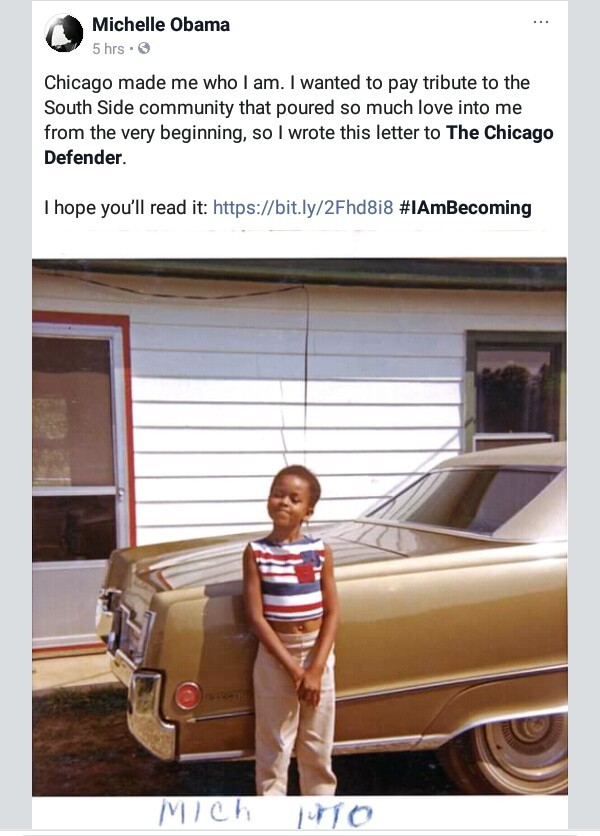