A Texas high school teacher who went on Twitter to rant about illegal immigrants has been fired.

Georgia Clark posted a series of tweets on May 17 to President Trump from a now-deleted Twitter account, trying to expose undocumented immigrants at the High school. She wrote,

“ISD is loaded with illegal students from Mexico. I really do need a contact here in FW who should be actively investigating & removing illegals that are in the public school system.”

“Carter-Riverside High School has been taken over by them,” Clark wrote to Mr. Trump. “Drug dealers are on our campus and nothing was done to them.”

She asked President Trump for a contact in Fort Worth “who should be actively investigating & removing illegals that are in the public school system.” 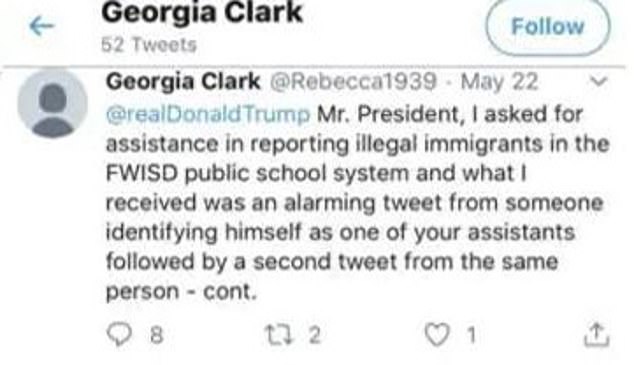 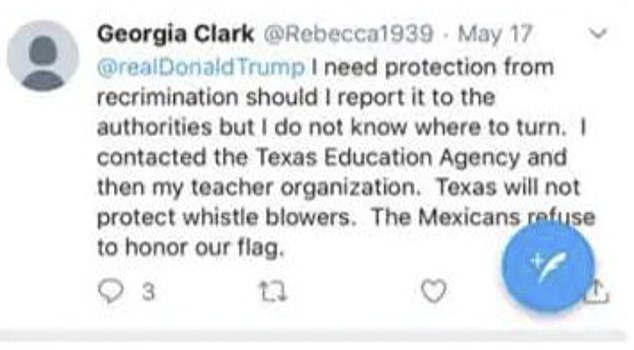 She admitted to the tweets during investigations before she was fired, according to CBS Dallas/Forth. Fort Worth Independent School District said they voted 8-0 to terminate the contract of Georgia Clark.

Clark has been a high school English teacher in the Fort Worth Independent School District for more than 20 years. According to the school, she joined them in 1998.

Reacting to the termination, Clark’s attorney said they will fight back and will be asking for a hearing to contest her firing.

According to Texas state law, Clark has 15 days to appeal the decision with the state Education Agency. As that appeal process plays out, Clark technically will remain an employee and collect a paycheck.

In 2013, Clark was suspended without pay, and reassigned when she called a group of students working together and speaking Spanish, “Little Mexico,” and she referred to another student as “white bread.”

In that same disciplinary report, Clark was said to have made her students do an activity in which she separated her students by their race and told the “Mexicans” to cross the border to the other side of the classroom.